I grew up in the 70’s, an era known for its kitch and bad taste. 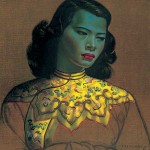 My grandmother was an ardent admirer of the painter Vladimir Tretchikoff.  Several prints hung in her lounge (the Lost Orchid, Pink Lotus and others) but what most intrigued me was a picture book that she had of his work.  This book was an A3 size with full colour photo’s of his most popular paintings, including the ones that he did during his stint in the Orient.  A particular favourite of mine was the Green Lady – probably his most well-known piece.

I found the colours of her skin (green and blue with a touch of red) absolutely fascinating and would stare at the picture for hours.  My grandmother passed away in 2003 and the prints and the book were donated to the old age home where she spent her last years.  I forgot about it until a couple of years ago at a bookclub meeting with my friends.  A friend of mine, Cristelle, was into making  jewellery and brought some pieces to show us.  One of them was a laminated picture of the same Green Lady on a scrabble tile.  I was immediately drawn to it because of the memory of my grandmother but when I turned the tile over and saw that the letter on the back was “L” (the first letter of my name), the deal was clinched!  I bought the piece and it has since become a favourite of mine.

A year or so later I bought a book on the art of Tretchikoff and the full colour photo’s of the green Asian ladies so inspired me that I had to try it out.  But where to find a model?  The opportunity presented itself not long after.  During a training course at work, I spotted a colleague whom I had known for a couple of years and thought she would make the ideal model.  She had the most interesting face with beautiful traces of Asian influences.  An artist cannot be timid, so I boldly asked her if she would mind posing for the photos.  She generously agreed and became the model that I worked from.

First I did a layer using Sap Green, Titanium White and Payne’s Gray.  The latter was used for the shadows because it’s a beautiful dark blue without being too bright.  I didn’t use yellow on the face, preferring white. 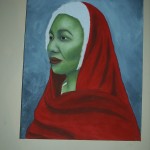 At first I wanted to do the face in an impasto style which I did over the first layer.  The veil was done in red, burnt sienna for the shadows and red mixed with white for the highlights. 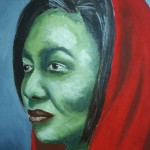 When I showed the painting to a friend, she commented that the skin was a bit too rough – it looked like the lady had bad skin…  Fortunately the paint was still fairly wet from the previous day and I could blend the skin quite easily.  I must admit that it looked a lot better after that.  I’m quite pleased with the final product.  The background was done in Ivory Black and white and I made it darker towards the bottom.  I put additional white next to the head when the painting was finished, to make it stand out more in contrast. 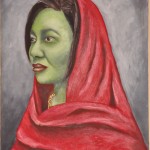 Some friends said it was a bit “weird” for their taste, but I like it.  At the moment I’m working on a second painting in the series.  Keep checking the blog for updates.

Please leave a comment.  I’m looking forward to your feedback.