I started the second painting in the series of two for South African Breweries. 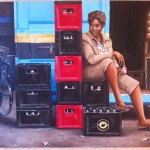 I loved the setting of the woman looking back as if she’s looking for customers to come and buy beer for the weekend!  I also liked the red beer crates and the interest that the bicycle brings to the picture. 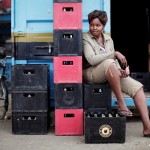 I started with filling in the background first and spent quite a lot of time getting the container right.  Because it is a man-made object, and the style of painting is photo-realism, it is imperative that the lines are straight.  Skewed or wobbly lines would throw out the observer’s eyes immediately.

The bicycle was a challenge.  It was important to get all the bits of it correct so that it looks real.  I filled in the major parts of it first to ensure that it was anchored to the canvas.  I must admit that I “made up” some of the details because it had a weird shape.  Then I did the background with two layers and finished it before tackling the bicycle again.  The details on the bicycle were the last thing to do. 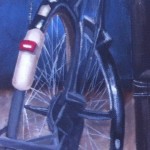 Close up of bicycle

The background behind the bicycle really competed with the bicycle and I wanted the bicycle to stand out much more – after the woman it was the second focus point of the painting.  So, I used a very thin wash of Black and turps and brushed over the background.  That ensured that the detail was still visible, but it became darker and receded into the background.  I thought that worked really well.

The beer crates got two layers of Burnt Umber and Primary Red straight from the tube.  I dry-brushed the highlights in white over it and included the imperfections to make it look real. 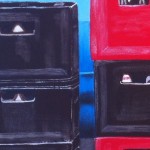 The woman’s skin was done in Burnt Umber, Flesh and Burnt Sienna.  Again, the Burnt Sienna is crucial in giving her a “warm” and “human” look.  I built up the flesh layer by layer – there are a total of 4 layers on the skin.  The highlights were done last with a light coloured flesh and finally white as a super highlight. 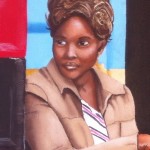 Close up of face

The clothes were a bit daunting.  In the end I decided not to include every little detail and really focused on getting the shape of the material correct.  To get the khaki colour, I used Burnt Umber and White, but added a little bit of flesh to ensure that it didn’t look too dull.

The background inside the crate was done in pure black with some detail of the shelves.  I ensured that the detail receded into the background by blending the colours well, in order to achieve the right perspective.  The bottle on the shelf was interesting so I added it.

The foreground was done in Burnt Umber, Yellow Ochre and White and I had to keep on lightening it.  I added some leaves so that the ground doesn’t look too plain and broke it up by adding lighter and darker sections, suggesting pebbles. 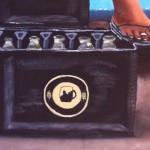 Close up of feet and crates

The shadows on the ground were important to get right and I ensured that the woman, the crate and the bicycle had clear shadows to anchor them to the scene.

Lastly I added the scuffed detail on the container and ensured that the lines aren’t too straight – notice the broken line between the yellow and the black paint.  There’s also red paint on the black areas. 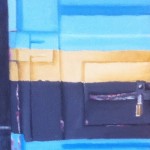 Close up of container

I think this has come out very well and I’m very proud of it!  Your comments are welcome.

3 thoughts on “Ready to Trade”