A friend of mine, Cristelle, got married in August 2011 and for their honeymoon they went on an extended trip through Europe.  It really was the trip of a lifetime – there’s no city in Europe worth visiting that they didn’t go to!  And they took in excess of 3,000 photos!  Always looking for new subjects to paint, I asked her to have a look at her photos and send me a couple that would work well for a painting.  She was very excited about the prospect but replied that it’s her husband’s department – she will ask him to sift through and send me a couple of options.

Unfortunately, about two weeks after our conversation, her husband passed away quite suddenly from a heart attack.  It was a great shock to all of us.  After the funeral she asked me to still do the painting because it would mean such a lot to her.  The picture that she chose is one that she took in Paris.  When coming out from the Eiffel tower, she spotted this woman sitting at a café texting on her phone.  She looked so deliciously “Parisian” that my friend couldn’t resist snapping a quick one.  It turned out to be a beautiful photo and lent itself very well to a stunning painting. 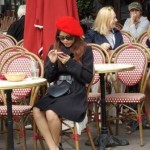 Original photo outside the Eiffel tower in Paris

There was a lot of detail in this photo.  No, let me rephrase that:  there was an inordinate amount of detail in this photo!  The chairs alone were quite a challenge.  I printed the photo on good quality paper and also printed an overhead of it in order to trace it.  I had to decide which style to use and considered expressionistic.  However, with the amount of detail I through that a realistic style would bring the painting to life better.

First I started with the umbrella.  I decided to change the colour from red to green because I wanted the red beret to be the focus point of the picture.  Red would contrast very well against green, being complimentary colours on the colour wheel.  I used sap green and highlighted the lighter areas with yellow.  Next I used flesh colour for the woman’s legs and inserted the shadows with Van Dyke Brown in the first layer to get the shape right.  I also used Burnt Sienna to do the shading. 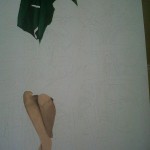 Legs and the umbrella first layer

Next I did the chairs in a Yellow Ochre and white and shaded it with Van Dyke Brown.  That turned out to look too yellow and I subsequently re-did it with a mix of Van Dyke Brown and white.  That created a pleasing cream colour that fitted in better with the colour scheme.  The woman’s dress was done with a very dark grey and I put in the shadows in black with the first layer so as not to lose the detail.  The shoes were done in black and the table legs in dark grey. 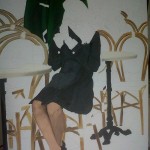 Chairs first layer (too yellow) and dress in dark grey

The two people in the background (right) added some interest to the picture, especially the lady in the far right looking back at the beholder.  It’s almost like she’s caught my friend in the act of taking the picture illicitly! I did her in light grey and the blonde woman’s jacket in Payne’s Grey (it makes a beautiful blue when used straight out of the tube).  The shadows were done in black.  The beret, being the focus point, was done in a bold red with the shadows in Burnt Sienna.  I initially thought of doing the backs of the chairs in pink, but changed it to green to fit with the colour scheme of the green umbrella. 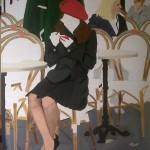 The foreground was done in various shades of grey, getting darker towards the background.  I had to pay careful attention to the details e.g. where the people’s clothes showed through the gaps in the chairs to ensure that it looked realistic.  In this picture you can see that I forgot to include the blonde woman’s right leg – which would have looked very odd. I also decided against putting too much detail into the reflections of the windows because it could distract from the main picture. 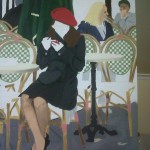 Backs of chairs and red beret

I spent a lot of time on the woman’s face and hands, using flesh, Burnt Sienna and Van Dyke Brown to do the shading.  The lips were done in Burnt Sienna, which makes a great dark red when used out of the tube.  I put in the highlights in dry brush with white and grey and created the highlights on the table legs with grey and white.  The detail on the shoes was done in Yellow Ochre,  yellow and white.  I decided to keep the fallen leaves in the picture (there’s a nice one in the foreground) and also added the ones in the back so that one leaf doesn’t look strange. 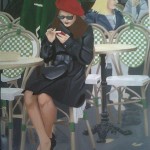 The next step was to put a second layer on the umbrella with Sap Green.  The highlights were done with Napium Yellow and blended while still wet.  The green squares of the chairs were done a little darker at the bottom to create the illusion of a shadow.  Some super highlights were added to the tables to make them stand out and I also added a bit more grey with a dry brush to shape the iron.  It looked like the girl was floating in the air, so even though the photo didn’t show it, I added the cushion of the chair that she’s sitting on.  This did a lot to “anchor” her to the scene.  I did the shadows on the ground in dark grey with a dry brush and added white and grey details in dry brush on the rest of the ground. 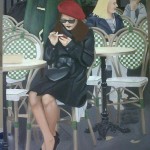 I left the cool drink glass for last – probably because I was a bit apprehensive about painting it!  To get into the detail, I looked at the highest resolution of the photo on the PC and painted just what I saw.  It was surprisingly easy!

The final step was to touch up the whole of the painting to ensure that there is no open canvas showing and that all the smudges have been cleaned up.

When I presented my friend with the painting, she professed to love it.  In fact, the blonde woman in the background looks a lot like me and 6 people (including my two children) asked if it was, in fact, me!  So, I told her that I’ve included myself in the painting so that she can think of me every time she looks at it.  I hope that it brings her much joy. 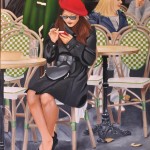 The final painting: Meet me in Paris

One thought on “Meet me in Paris”