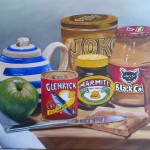 I love painting still lives.  When browsing the internet I came across a photo of various foodstuffs and thought that something similar will make a great painting.  I identified a couple of real South African products and my husband and I played around with a couple of options.  We finally settled on the following photo. 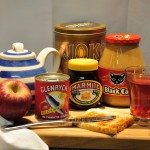 I liked the combination of the colours (blue, red, yellow) and decided to make the apple green to create a contrasting colour.  My teacher also suggested that I should include the Marmite reflection in the knife.

I started with the kettle and even in the first layer tried to get the shading right.  It just saves time later when you need to add the details.  The light in the photo is quite yellow, so I used a little Yellow Ochre mixed with white.  The blue is French Ultramarine. 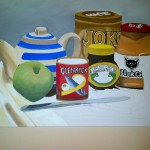 The apple is Green Oxide with Payne’s Grey for the shadow.  The yellow highlights are Yellow Ochre. 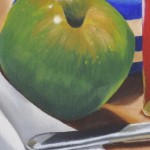 After that I did the writing on the Glenryck can and the Joko tin.  I realised that the “J” in Joko wasn’t quite right and had to re-do it.  In hindsight the writing on Glenryck was a bit too thick and I had to make it a bit smaller by painting red over it.  The red I used is Burnt Sienna (for the darker bits) and bright red for the rest of the tin.  The detail was very important e.g. see the thin yellow line around the tomato and the purple underneath the fish.  The fish was done in Payne’s Grey mixed with white and I kept to the shape and shading to make it look as real as possible. 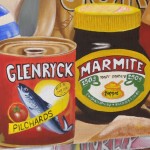 The Joko tin was done in Yellow Ochre and Burnt Umber, with white added to make the highlights.

I really had fun with the Marmite jar!  I used Burnt Umber mixed with a little bit of Ivory Black – just plain black would have been too dark.  The top of the lid is yellow, and the sides I darkened with a little Yellow Ochre.  I outlined the “Marmite” writing in a 0/3 brush with very thin paint.  The yellow sticker was a little darker than the top of the lid (mixed with Yellow Ochre) because it’s in a bit of shadow.  The writing in white was just scribbled – it didn’t make sense to put in all the words exactly, but I think it came out ok.

I struggled a bit to get the colour right for the peanut butter jar.  I started with Yellow Ochre and added bright red to it.  That made it too orange and when I added white, it turned peach.  Not good.  I started again with Yellow Ochre and a little bit of Burnt Sienna and then white and that seemed to have done the trick.  For the shadows, I added Burnt Umber and for the highlights white.  The lid was done in red with Burnt Sienna for the darker bits and I added yellow to the mixture to get the highlights on the side of the lid.  Again, the picture of the cat and the writing was done with a small brush and left to dry before starting the other colours.  The detail (again) was important – notice the yellow shading around the cat logo.  The highlights were done in white, through two layers – the first one the white was worked in while the paint was still wet, and then I put in the super-highlights over it in pure white. 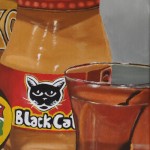 The hilt of the knife was done in grey (white and Ivory Black) and again I tried to capture the shading.  The rest the knife I just covered in light grey and then did the Marmite reflection in the second layer. 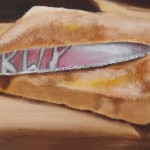 The cup of tea was a bit of a challenge.  I had to get the colour right and again struggled when it turned to orange and peach.  In the end I went for Burnt Sienna and Yellow Ochre darkened with Burnt Umber.  I put in the first layer trying to get the shading right.  I then let it dry and the second layer was dry-brushed on top of it.  The secret with painting a see-through object like liquid or glass, is to paint exactly what you see.  That’s the only way to make it look real.

The object I struggled with most, was the bloomin’ Joko tin!  I just couldn’t get the curve of the lid quite right and had to do a lot of re-work to get the shape correct.

I then focused on adding the details on the Marmite jar and the pilchards, and kept on adding and cleaning up.  Because these are man-made objects, they needed to be absolutely correct.

When I hung up the painting to dry, my son (6) looked at it and said “Mom, it looks real!”  He couldn’t have given me a better compliment!