A trip to Soweto in 2014 (in Johannesburg) provided the perfect opportunity to collect subject matter to paint.  Soweto is a rich environment where you can find a work of art in the making behind every turn.  My husband, a friend of ours from the UK and I spent a morning on a formal tour taking pictures of everything.  Here’s the finished painting: 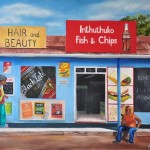 Back in the studio, I poured over the 338 pictures that we took that morning.  I decided to combine the following photo’s:

I compiled the photos on PowerPoint and started by drawing a grid.  I drew the picture onto the canvass with a terracotta pencil (it doesn’t give off on the paint the way that graphite does). 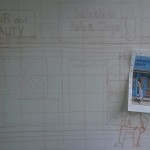 The next step was to “fill in” the major parts of the painting, adding some dimension with darker and lighter areas where possible.  In this step I figure out which colours to use and where I need to change.  I included a different sign (Beauty Salon) at the top to introduce a bit more colour and interest.  It’s crucial to keep the lines straight so that the composition is in balance at the end. 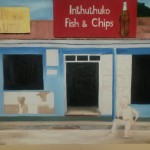 For the Coca-Cola sign, I painted the writing in grey first so that it would stand out against the white background.  Then I painted the red around it – red is very difficult to paint over once it’s on the canvas.  After the red had dried, I went over the grey with white again.

The next step was to put in the first layer of the two people.  I changed the colours a little bit – the blue jeans to viridian green and the red t-shirt to orange to bring in contrast to the painting.  With the first layer I already put in definition (dark and light) taking care not to go too light, because the highlights would be the last step.

I also saw that the top line of the roof wasn’t quite right – the left side was much lower than the right side (thanks, Carien for pointing it out!) and I fixed that as well.

During the next painting session, I added another layer to the sky and put in highlights for the clouds – I used Prussian Blue and white.  When this is dry, I’ll add shadows with Payne’s Gray.  I went over the yellow sign with Yellow Ochre as a second layer, and fixed the line of the roof.  I then put in the highlights on the Coca-Cola bottle using Yellow Ochre, Burnt Sienna and white and lastly went over the white writing with pure Titanium white.  I filled in the notice board in one colour (Burnt Umber with White) and then put in the details of the posters next to the door.  The last step for this session was to paint the pictures of the burger and chips, dagwood and whatever that top picture is!  I’ll wait for it to dry before I put in the red for the ketchup. 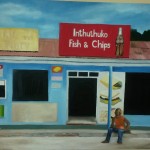 Next I started adding the details – the writing of the Beauty sign, the posters on the wall and the black board writing.  I dry brushed the “blackboard” with white to make it look like the chalk writing had been rubbed out.  I also used dry-brush techniques to create the inside of the shop by adding some fridges, sacks of flour and flourescent lights. 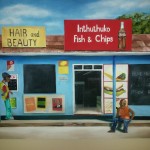 Detail on the posters and the people added

The next step was to put in the burglar bars in front of the two windows.  I cheated a bit…I used masking take to get the bars equal and painted them over with white.

I added the details of the posters as well.  When I looked at the painting, the ground looked too light and the porch too dark, so I changed it around.  I also darkened the shadows that the signs threw on the roof because the photo was taken close to midday and the shadows (although not visible in the photograph) would be more pronounced. 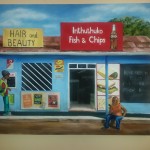 The customer requested to, instead of the window (which I must admit, looked a bit overpowering) include a copy of a beer brand.  I included a Carling Black Label wall sign, and thought that it came out quite well.  It actually became quite the focus point of the painting.